The Sabine Hills: a perfect day trip from Rome
Only 35 minutes from Rome's outskirts and just north of the Capital, perfect for a day out in the countryside or a longer stay as part of a relaxing holiday, the Sabine Hills (Sabina) will reward its visitors with ancient medieval history, unspoilt landscape, renaissance palaces castles and monasteries, cultural events, art exhibitions, hiking trails and of course the 'Sabina DOP' extra virgin olive oil from its olive groves.

Unspoilt countryside
The way the Sabine Hills are still today very rural and unspoilt is almost miraculous, despite its vicinity with a big city like Rome. The landscape of Sabina is quintessentially Italian, with its rolling hills covered by olive groves and fruit orchards and dotted with medieval hilltop villages and castles. Because of the olive trees and other evergreen mediterranean plants, the Sabine hills are always very green, all year round. A visit to one of the many hilltop villages in the area, will reveal beautiful views over valleys and mountains in the far distance.


History
Sabina is an ancient land where civilisation started way before Rome and the local archaeological museum in Fara Sabina tells a story of walled cities, powerful kings and the development of fine art, pottery, jewellery and elaborate bronze manufacts from 2,600 years ago. Three of the seven kings of Rome, Tito Tazio, Numa Pompilio and Anco Marzio, were from here.
During the middle ages, Sabina was part of the Holy Roman Empire and thanks to Charlemagne and his land donations, a local monastery called Farfa became a huge economic and military power in the area. The Farfa monastery owed its wealth to olive oil production for many centuries, as it was the largest landowner in Central Italy and it become an independent city state, its borders reaching well into modern Tuscany, Umbria and Le Marche.

Sightseeing
National parks such as Monti Lucretili and vast conservation areas allow those passionate about hiking or mountain biking to explore the area using ancient  trails, walking through green valleys, woods and cultivated land. However, even just visiting some of the villages in Sabina will be an experience in itself. Medieval villages like Toffia, Castelnuovo di Farfa, Fara Sabina, Farfa, Bocchignano or Montopoli have impressive defensive walls, beautifully decorated renaissance palaces and ancient churches.
A maze of picturesque alleyways, archways and little piazzas will welcome the visitor, almost resembling a movie set, without the mass tourism of other Italian regions. Impressive medieval castles can be seen in Rocca Sinibalda (Castello Cesarini, 1084 AD) and in Frasso Sabino (Castello Sforza, 955 AD).

Culture
Today, Sabina is well known for its art and music festivals which are organised throughout the year. Toffia is famous for its "Festa del Centro Storico', an art, music and street theatre festival which lasts for 5 nights in mid-August and attracts more than 3,000 people every night. Toffia is also known for its very active theatre, run by 'Officina 33'. In Fara Sabina there is an international Jazz Festival in July and Casaprota hosts the interesting art and music 'Arterie festival'.
A local music trio, called 'Lamorivostri', keeps traditional music alive, with frequent concerts in the Sabina area and in Rome.
Food
Sabina is famous for its extra virgin olive oil, the very first in Italy to receive the DOP denomination. Olive oil has been produced here for millennia (there is an olive tree that's 2000 years old) and is known for being light and flavoursome at the same time. The area is also well known for pecorino cheese, olives, salami and of course guanciale (cured pork cheek), necessary for any amatriciana or carbonara sauce. Cooking Holidays are run in Toffia. One day cooking classes, as well as olive oil tours, and wine tours are also offered in the Sabine Hills area. 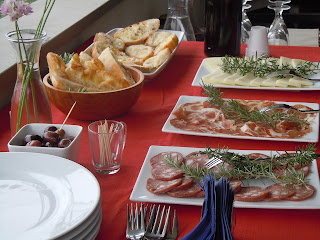 There are many Restaurants to choose from in Sabina. For an interesting combination of traditional dishes with a touch of creativity there is 'La Taverna del Corsari' in Montopoli.

How to get there from Rome
Fara Sabina is the best place to begin to explore the Sabine Hills. There is an excellent direct train departing every 15 minutes from many stations in Rome (Ostiense, Trastevere and Tiburtina, for example) to Fara Sabina Station. It takes 39 minutes to get from Rome Tiburtina to Fara Sabina. Here there are buses to many different villages in the Sabina area. By car, the direct way is via Rome-Florence (A1) motorway, Fiano Romano exit, then following signs to Rieti and Via Salaria, then to Fara Sabina.
If you join any of our Convivio Rome Culinary Holidays, or day activities such as our cooking classes, olive tour and wine tours, we include a free pick up and return service to our local train station.

Train information: can be found on trenitalia.com site
Bus information: can be found on cotralspa.it
© Guido Santi, 2020
Additional background information on Guido: Guido Santi is an eighth generation Roman who has a passion for cooking traditional Italian cuisine and for local, fresh, organic food and wine. As a follower of the Slow Food philosophy, he supports and promotes local farmers and the 'zero kilometres' philosophy. Guido runs "Convivio Rome" with his Australian wife Sally, offering cooking classes, 3 and 5 night culinary holidays, plus olive oil tours and wine tours in or nearby the medieval hilltop village of Toffia, Sabina (Italy), just north of Rome. You can follow Convivio Rome on Facebook and on Instagram
www.conviviorome.com
www.winetoursrome.com
Posted by Guido at 01:00